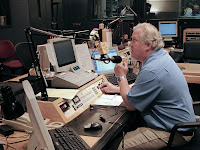 A couple of months ago my friend Spike O'Dell retired from WGN Radio in Chicago where he was the morning personality. He was an institution before that in the Quad Cities where he sparkled on WQUA, KSTT, and KIIK radio.

Another Chicago radio personality who was known throughout the world was the late Paul Harvey who passed away just a few days ago. He was truly an American icon and I remember listening to him way back in the 50s.
After Paul's death the new WGN morning man called Spike at his retirement home in Nashville and they had the following conversation which I thought you would enjoy.
Email ThisBlogThis!Share to TwitterShare to FacebookShare to Pinterest
Newer Post Older Post Home