I love Arizona….everything about it.  The desert, the lakes, streams, canyons, mountains, and the pine trees in the high country.  As a photographer our diverse and beautiful State offers vistas that my camera simply falls in love with!

A visit to Page, Arizona offers the breathtaking experience of the Antelope Slot Canyons and Horseshoe Bend.  Arizona is world renowned for the majesty of the Grand Canyon.  Then there’s Hoover Dam, Glen Canyon Dam, Roosevelt Dam, just to name a few, in fact the list is long!

Ninety minutes North of Phoenix is another must visit; the splendor of Sedona.  This secluded community is nestled in red rock formations and is quite an experience at every turn of the road.  Sites to see are Schnebly Hill, The Chapel of the Holy Cross, view from the airport, Red Rock State Park, shopping and dining in downtown and Tlaquepaque. The ride up 89A from Sedona to Flagstaff is simply magnificent!

Southern Arizona also has its charms including the sites and sounds of Tucson, Tombstone, Bisbee, and the Kartchner Caverns.

Phoenix is the capital of Arizona and the hub of activities and entertainment!  Sports?  We have them all: Football, Basketball, Baseball, Hockey, & Golf.  During a ten day period, the first part of this year, Phoenix was on the world map with the Barrett-Jackson Auto Show, The Phoenix Open Golf Tournament, The Pro Bowl, and the Super Bowl.  I can’t think of any city in the world that had this much excitement all essentially in two weeks!

Arizona has a new leader, Governor Doug Ducey, former State Treasurer and founder of Coldstone Ice Cream. Governor Ducey promises to improve education and advertise the State as the “place to be for small business!” Apple recently announced a two billion dollar data center to be located in Mesa.

Another strong Arizona leader is long time Sheriff Joe Arpaio.  He rules Maricopa County with a strong arm and is known as “America’s toughest Sheriff.”  He was first elected in 1993 and at the age of 82 will run again this year. Joe says “If you don’t want to eat bologna sandwiches and wear pink underwear, then don’t come to my jail!”

You gotta love a place that has 333 days of sunshine a year and the world’s most beautiful sunsets! 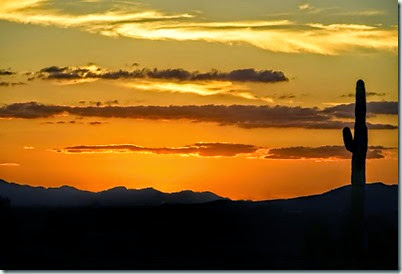 And now you know a few reasons why “I love Arizona!”

All photos by Gary Stanley and you may click on them for a larger view.