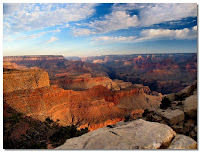 The photo was taken last year. Diane and I camped out at the Canyon, got up at 4 am and made our way to this spot, which is called "Moran Point." We sat on the rock in the foreground in darkness, then watched as the sun came up behind us. What a breathtaking site it was at 6 am when it was shot. Thanks for your vote!
Email ThisBlogThis!Share to TwitterShare to FacebookShare to Pinterest
Newer Post Older Post Home