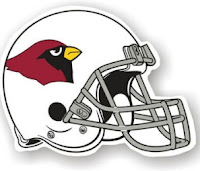 So, two big games next Sunday. The Cards and the Eagles, and the Steelers and the Ravens. Of course the two winning teams will match up in Tampa Bay on February 1st for Super Bowl 43. GO ARIZONA!
Email ThisBlogThis!Share to TwitterShare to FacebookShare to Pinterest
Newer Post Older Post Home