Back from a fun trip! 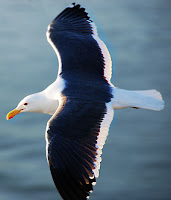 We just returned from a jam packed fun trip. We took our RV and another couple to San Diego and parked at an RV resort. The next day we boarded a cruise ship for 4 days of heavy eating with a stop at Catalina Island and Ensenada, Mexico. I say "heavy eating" because they serve food all hours of the day and night, it's included in the price, and it's hard not to sample everything!

I took this photo of Jonathan Livingston Seagull from the top deck of the ship. I haven't had a lot of experience photographing birds in flight and it takes some practice. You have to follow it and shoot a little ahead to keep it in the frame.

After the cruise we spent a day at the San Diego Zoo where I got some good shots of its residents, including this big boy. The gorillas were really fun to watch, especially the young ones who liked to play like kids. Two of them spent some time boxing which was really funny.

After the zoo, we drove to Imperial Beach where we enjoyed a walk along the water's edge. There's something about the feeling of sand on your bare feet, the sound of the waves and the beauty of a sunset to put you in another world. I must have taken 50 sunset shots, but I liked this one because of the bird walking in the foreground.

Dinner with a glass of wine at a Greek restaurant next to the ocean rounded out our day. (Click photos for larger view.)

Now it's back to reality, but that's not all that bad because my week consists of 6 Saturdays and one Sunday!

Your Role in our new Government

In February's edition of Cyber News I talked about becoming engaged with the policies of our new government. I referenced the White House web site and quoted President Obama's wish for a "Transparent Administration."

I have stated openly that I did not vote for Obama but since he is in office my idea is to stay positive for America. We must strive to become one people, one voice, one Nation.

If you don't like his policies, directives or appointments then let it be known and go direct to the source. Don't hide behind an endless thread of nasty emails and conversations which are valueless, only spread negativism, and help to divide America.

Instead, use your energy to direct your opinions to your Congressman or Senator. They were elected to represent YOU. Here's a web site where you can click on your state and it will give you phone numbers and email addresses.

Go to the White House Web Site and send an email, or better yet if you have the nerve, give them a call on their published number, 202-456-1414.

Today I received an email from a Cyber News reader who did just that and here is what he wrote to me:

A few days ago I visited whitehouse.gov and did two things. I wanted to make some observations and suggestions regarding the stimulus bill, now in the senate. First I sent my comments via the website email address. Second, I saw a phone number for the White House, so I thought what the heck and called it. A very nice young man answered it and I told him I’d like to make sure that Barack had my comments re the stimulus bill. He told me to please make my comments; he would make notes and then make sure he had my thoughts down correctly.

To say that we were pumped up for Super Bowl Sunday would be an understatement! Guests at our party were greeted by monitors in my studio filled with Cardinal logos.

People visiting always ask "Why so many monitors?" Well, I actually only use three. The one to the extreme left is Diane's computer, then my laptop, the 3 that I use on my computer, a TV, and the last one is a spare computer which rarely gets turned on.

If I'm not at a customer location, traveling, or taking photos, I'm spending the good part of my day at the computer and once you have multiple monitors you wonder how you ever got along with just one.

Anyway, the Super Bowl game was fantastic, as you know, and even though we lost in the last seconds, we are very proud of what the Cardinals accomplished this season!