What's going on in Arizona? 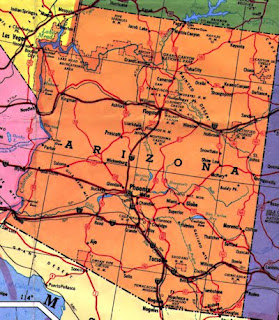 Arizona is one of the most beautiful states in America.  From the deserts of the South to the Grand Canyon in the North; it's a wonderful place to live and people move here by the thousands each year to enjoy their retirement.

Arizona is now being spoiled by thousands upon thousands of people entering our Country illegally.  This is happening because our southern border is not secured and the situation worsens by the day because our federal government will not take proper steps to alleviate the problem.

Recently our Governor signed a law that would enforce immigration guidelines, and all hell broke loose politically.  The Mexican President recently visited Washington, talked badly about Arizona, and spoke harshly against the law in front of Congress claiming it to be discriminatory.

Since when does the United States of America allow a foreign president to dictate to us what kind of laws we should implement?  And furthermore why did the Speaker of the House, the Vice President, the Director of Homeland Security and other members of Congress stand and applaud his derogatory statements?  I personally am appalled by these actions and ask our President to start standing up for America!

This Country of ours is filled with people from all nations and have been welcomed by the Statue of Liberty for decades.  People come to America because it is "The Land of Free" and offers unlimited opportunities for those who seek them.  If you want to live here you should become a legal resident, speak our language, fly the American flag, and abide by our laws. If you don't want to comply with this, then you are not welcome.  Why do you come here illegally and expect the world to be handed to you?  Why do you demand that we pay for your health care, your education, and teach YOUR language in our schools?  This is insanity!  Don't stand outside of our State Capitol and demonstrate for your rights.  You don't have rights in this Country unless you are a legal citizen!

If you cross the border of any other Country in the World, illegally, you are in deep trouble.  You could spend years in prison or even be shot on the spot.  But enter the U.S. illegally and we give you a job, a driver's license, social security card, welfare, food stamps, subsidized rent, free education, free health care, a lobbyist in Washington, billions of dollars worth of public documents printed in your language, and the right to carry your countries flag while you protest that you're not getting enough respect!

Actually, it's not your fault, it's us who have lost our minds.  It's the  bleeding heart liberals and extreme left wingers who are at fault, and come this November, they will be fired!

Here in Maricopa County, we have the best Sheriff in the world.  His name is Joe and he has done an outstanding job of protecting law abiding Arizona citizens for all the years he has been in office.  His job now has become very difficult because he is constantly accused of racial profiling.  Give me a break!  We have a great Governor who wants to "Build a Better Arizona" and uphold the laws of the land, but is now being severely criticized by certain "off the wall" jug heads in Congress.  Give me a break!

There are now three types of southern border infiltrators.  First there are hard working, honest, Mexicans who want a better life, and they are welcome to it if they go about it legally.  Secondly there is the fierce battle of the Mexican drug lords who are bringing drugs and terror into America.  Thirdly are the middle east extremists who are out to destroy our Nation.  Do we remember 911?

Phoenix is full of crime and is the number one city in America for kidnapping and it's all because of the Mexican drug lords.

If you think that only Arizona is effected by this problem, then you have a rude awakening!  It is effecting our whole Country. Here's a news report, not from Phoenix, Arizona but from Atlanta, Georgia, and it is a must watch!

If you are reading this and feel as I do, then stand up and be bold!  Tell your Congressmen and Senators that we want our borders secured NOW, before it's too late!
Email ThisBlogThis!Share to TwitterShare to FacebookShare to Pinterest
Newer Posts Older Posts Home
Subscribe to: Posts (Atom)