A City Unlike Any Other City in the World. 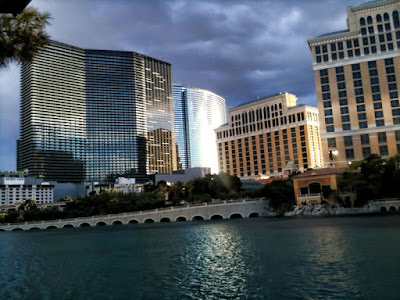 Las Vegas, in many ways, is one of the most intriguing cities in the world.  So much to see, the best entertainers, and just a fun place to visit.

We spent last weekend there and it's incredible how this city re-invents itself every year.  Buildings are constantly being torn down and bigger, taller, more beautiful ones are climbing to the sky.

Everyone's spirits are high when visiting this city because it's another world and far from everyday reality.  In one way it is very glamorous, and in another very sinful.

Gambling is fun as long as a person uses some common sense and thinks of it as entertainment.  What's shameful are the thousands who are pouring their money into the games and going home broke.  It can be very addicting waiting for that big jackpot.  They didn't erect all those buildings with their money!

The part of our trip that I found disgusting was walking along Las Vegas Boulevard and being hustled by hundreds of people handing out baseball cards.  The problem was that the cards weren't about baseball.  They had pictures of girls who were for hire.  The good part is that 99.9% of people discarded them but the bad part is that they ended up on the sidewalks and in the streets. Not a pretty site. I think the City Council would pass a law forbidding this.  All in all we had a great time and two days there was plenty for us.

The photo above was taken with my Iphone, believe it or not, as we were were waiting for the fountains to erupt in front of the Bellagio.  You may click on it for a larger view.  See my Las Vegas photos here.
Email ThisBlogThis!Share to TwitterShare to FacebookShare to Pinterest
Newer Posts Older Posts Home
Subscribe to: Posts (Atom)