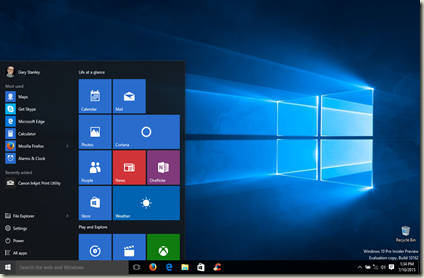 I have experienced every Windows Operating System since the beginning of time!  Windows 95 was definitely the biggest splash!  Microsoft lit up buildings in London and New York with the 95 logo and it was a huge marketing extravaganza!  Remember the Rolling Stones theme song?

At that time I lived in the Midwest and remember driving to Chicago’s McCormick Center for the big event.  Windows 95 was the first real user interface.  Many versions have passed, some good, and some not worth mentioning, like Windows Me and Windows Vista.  The OS that the world passionately endorsed was XP and people are still using it despite the fact that support ran out long ago.

Windows 7 was very successful and well respected, then came along Windows 8, a total disaster!  People were mad and frustrated and most refused to upgrade, especially businesses.

Microsoft quickly upgraded to 8.1, but it wasn’t any better.  The biggest downfall was the removal of the start button.  The system was really two, the Metro and the Desktop and did nothing but offer confusion.  In order to make any sense of it all you had to install a third party start button to regain any familiarity and unless you were pretty computer savvy this had to be done by a technician.

Microsoft slowly woke up to the fact that they had a real loser on their hands and decided to totally skip the next progression which would have been Windows 9.

So here we are in July of 2015 and at the end of the month MS will release what they are heralding “The Revolutionary new Windows 10.”

I have been beta testing Windows 10 on an older laptop for months and with the last couple of updates it’s almost ready for prime time.  I’ll admit that it boots up and shuts down in seconds instead of minutes which is very pleasing.  But, there still are a lot of changes that will take getting used to.

Like it or not it’s here and if you use a PC as apposed to a MAC, you sooner or later will be using Windows 10 or some future variation.

So here’s the bottom line.  The best part is the new PC Operating System will be FREE to users of Windows 7 and 8.1 for one year after July 29th.

You’ve probably seen the Windows logo down on the lower right taskbar near the time and date whether you’re using Windows 7 or 8.1.  If you click on it you can reserve your free copy of Windows 10, and read up about the new features.

My advice, however, is not to install it immediately!  You have a whole year to upgrade to Windows 10 for free.  There will be bug fixes and patches soon after release, so let’s wait until things stabilize and the dust settles, then start our new learning process.

For the first time in Microsoft's history they are giving away an operating system and the reasoning is they want the world to adapt quickly, but of course there will be those that will cling to Windows 7 as long as possible.  But, when they finally give in they will have to pay.