Is a Computer Masculine or Feminine? 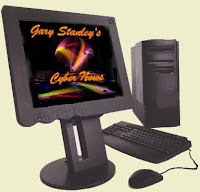 A Spanish teacher was explaining to her class that in Spanish, unlike English, nouns are designated as either masculine or feminine.
'House' for instance, is feminine: 'la casa.'
'Pencil,' however, is masculine: 'el lapiz.'
A student asked, 'What gender is 'computer'?'

Instead of giving the answer, the teacher split the class into two groups, male and female, and asked them to decide for themselves whether 'computer' should be a masculine or a feminine noun. Each group was asked to give four reasons for its recommendation.

The men's group decided that 'computer' should definitely be of the feminine gender ('la computadora'), because:

1. No one but their creator understands their internal logic;
2. The native language they use to communicate with other computers is incomprehensible to everyone else;
3. Even the smallest mistakes are stored in long term memory for possible later retrieval; and
4. As soon as you make a commitment to one, you find yourself spending half your paycheck on accessories for it.

The women's group, however, concluded that computers should be masculine ('el computador'), because:

1. In order to do anything with them, you have to turn them on;
2. They have a lot of data but still can't think for themselves;
3. They are supposed to help you solve problems, but half the time they ARE the problem; and
4. As soon as you commit to one, you realize that if you had waited a little longer, you could have gotten a better model.

The women won.
Email ThisBlogThis!Share to TwitterShare to FacebookShare to Pinterest

America IS Standing Up! 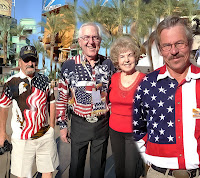 Sunday afternoon, with camera in hand, Diane and I decided to drive a few miles from our home to Westgate. That's the location of the 2008 Super Bowl and the Glendale Arena which last night featured Sean Hannity's 2009 Freedom Concert. Since it was sold out we decided to go there and just hang around outside to be a part of the occasion. I shot a few pictures, especially of people with patriotic shirts. The photo here is 3 pictures combined into the one.

I thought, by chance, could there be tickets still available, so I wandered to the a ticket window and inquired. It pays to ask and we ended up being a part of this wonderful event that lasted almost four hours! Hannity played host and his talented line-up included Lee Greenwood, Rich Little, Charlie Daniels, John Voight, Michael W. Smith, Oliver North, and Billy Ray Cyrus.

This was an extremely refreshing experience as thousands of people were polite, well mannered, and enthusiastic! Of course the main stream media wasn't there because there were no fist fights or angry mobs, just good people who wish President Reagan was back in office! 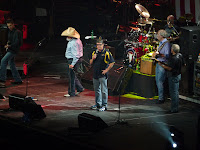 arted August 1st in Houston, then Dallas, San Diego, Las Vegas, Phoenix, Jackson, New Jersey, Cincinnati, and Atlanta. If you live near the last 3 cities you may still have a chance to be a part of this most patriotic event.

Here is a photo I took of Sean singing with the Charlie Daniels band. (Click for large view)

Town Hall meetings are taking place this month, while Congress is in recess, and people are speaking out against the current direction of our Nation. We will not stand for socialism!

Will someone explain to me why is it that liberals can say anything, but if an opposing view is expressed, Palosi says it is "Un-American" and the President tells us to "shut-up?" Wow!

America IS Standing Up and bringing pride of Country back into reality! Thank you American's who want your Country back and thank-you Sean Hannity!
Email ThisBlogThis!Share to TwitterShare to FacebookShare to Pinterest
Newer Posts Older Posts Home
Subscribe to: Posts (Atom)