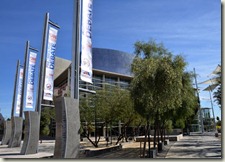 The day after the Republican debate in Mesa, Arizona, I gave a photo seminar to a local computer club.  After the presentation, and since the Convention Center was so close by, we decided to stop and get the feel of how it must have been to be present for this event.  Crews were busy tearing down and cleaning up.  People were just leaving after the finish of an outside concert.  There seemed to be excitement in the air on this beautiful sunshiny day. 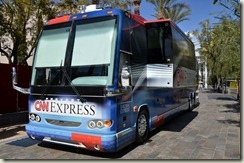 Just down the sidewalk and around the corner we saw the CNN bus.  It was very impressive with its election campaign paint job.  I took some photos and then met the driver.  I told him that I was a retired jet pilot but my secret fantasy was to drive a large bus like this.  He said “Let’s go in, fire it up, and you can drive to our next stop in Oklahoma.”  He was kidding of course, but did gave us a full tour.  It was fascinating for me, as a technology nut, to digest the magnitude of the whole thing.  One side was covered with flat screen monitors, the other side with a long couch and all the other luxuries you can imagine.  The back of the bus was chucked full of electronics manned by a full time technician.  They have the capability of transmitting four satellite feeds simultaneously.

Giving my photo seminars is always a blast, but this was an extra unexpected bonus for the day.  Thanks for the hospitality and the tour Dale!