It’s always fun to get away for an adventure and to create a memory.  We loaded up the car the first week in May and headed Northwest.  The first night we spent in Vegas.  We’ve been there so many times that this time we stayed off the strip, away from the hustle and bustle of wall to wall people and the gambling scene.  It was very relaxing just to stay in the room and do nothing.  (You may click on all photos for a large view.)

It’s fun taking secondary roads to really enjoy a trip as opposed to the major highways.  We just took our time, stopping in small towns and taking photos.  The second night we stayed in Ely, Nevada.  After checking into our motel we drove around and explored.  We spent time at the old railway station and enjoyed watching an old locomotive leave the station on a crew training mission.

The third night we bunked up in Twin Falls, Idaho.  The city was very clean and modern and we enjoyed the short ride out of town to view the falls for which the town was named.

A couple of days later we parked the car and boarded the Crown Princess in Vancouver, BC for a seven day cruise of the Alaskan inside passage.  This was the skyline as we departed on our voyage.  If you’ve ever been on a cruise, then you know that you can partake of fabulous food 24/7.  It’s an easy way to gain weight!  There are activities all day long while at sea, and entertaining acts in the theater in the evening.

After a day at sea we spent all day in Glacier Bay.  The weather was very cooperating with sunny skies and very pleasant temperatures.  It was a great time on the main deck while people partied and took photographs.  The sight of the snow capped mountains and the glaciers was breathtaking!  The ship was 19 stories high and we our room was on the 12th floor which offered wonderful views as we cruised. 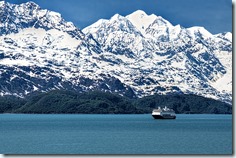 This photo shows the majesty of the mountains in the bay as a sister ship passes in the distance.  The mountains make that ship look awfully small!  Our next three ports of call were Juneau, Ketchikan, and Skagway. The downside was that it rained at all three stops, but we didn’t care.  Got off the boat, opened our umbrella, had fun shopping and having lunch.  On our stop in Juneau there were five cruise ships docked.  With an average of 3,000 passengers each, meant that 15,000 people invaded the city at one time!  Of course many stayed on board because of the weather.

Here we are docked in Ketchikan. I took this picture from our 12th floor

room balcony which illustrates how high we were from the water.  The rain had stopped for a time while we took this photo with a $5 selfie stick we picked up at one of the gift shops.

The cruise was very pleasurable and afforded a wonderful memory.  One of the highlights was meeting a couple from Ontario, Canada.  We spent a lot of time with them and thoroughly enjoyed their company!

After the cruise we back tracked through Vancouver to the US border.  The line of vehicles was very long and it

took over an hour just to be waved on by a border guard.  We spent that night in Seattle right next to the airport.  This was sundown from our window. Being a retired Jet pilot, I got a real kick out of having breakfast the next morning with an Alaskan Airline Captain.  We talked for over an hour about aviation and photography.

From Seattle we headed South and then West to highway 101 which we took all the way to San Francisco along the coast.  The surprise of our lives came when we drove down the coast of Oregon as it was truly unbelievably beautiful!  Although we drove through a lot of rain it didn’t dampen our spirits as we stopped for many photos. 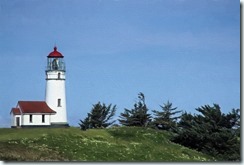 Blanco.  That day it was closed to tourists so I took this shot at the gate which was about 400 yards away.  Turning to the left and looking down the coast was this scene. 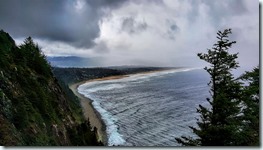 Another off highway experience was a short trip to a high lookout.  The rain stopped here but you can see the storm ahead of us as we continued Southbound.

The beauty of the coast and the fact that we took our sweet time made for a real adventure!  So many unique and picturesque towns along the way and we stopped at them all.

This is Port Orford, where we had lunch and enjoyed this view from the
restaurant’s picture window.  Next door was a visitor’s center where we sat and talked to an older gentleman about the beauty of Oregon's coast.  If you like clam chowder it doesn’t get much better than what we had many times for lunch!

At one of our coastal stops we drove right down to the ocean, got out of the car, enjoyed a leisurely stroll, and took pictures.


On top of the hill behind us was a very popular restaurant where we had lunch with this ocean view.  Great salad and seafood.  I just can’t say enough about the Oregon coast!  We will want to do this again sometime.

Further down the shoreline we stopped at Gold Beach.  Another day,
another great lunch.  In the bay close to where we ate was the Mary D. Hume.  She was built in 1881 and served the sea for 97 years!  She sits there today with many stories and memories buried aboard.

Next we did something we’ve wanted to do for years and that was  driving through the Redwood Forest.  The drive was slow on a very narrow dirt road and sometimes hairy when meeting a car coming the other way, but well worth it!  The trees are some of the tallest in the world and you can see the girth of this big boy!

One of our last stops was in San Francisco where we had dinner with friends we had met on a Mexico cruise we took last year.  That was very enjoyable and the next day we headed home.

If you wanted a really cool vacation, fly to Portland, rent a car, drive down the Oregon coast to San Francisco, then fly home.  This is roughly a 16 hour road trip in which you could take your time to enjoy!

Footnote:  I love the way technology advances everyday, especially with phone cameras.  I lugged my heavy and expensive Nikon DSLR on this vacation, but all these photos were taken with my Samsung Galaxy Note
5. The new Galaxy Note 7 will arrive on August 2nd, and I can hardly wait for the new camera enhancements!