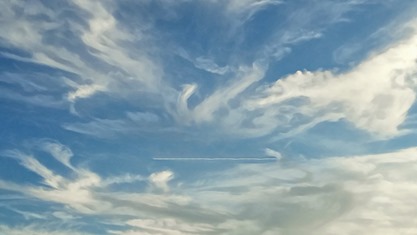 I have starred at the sky since I was a little boy.  Being raised on a Iowa farm I would often climb up and sit in a crabapple tree and wonder why some days the skies were clear and other days it would be cloudy.  On cloudy days the formations could sometimes be very intriguing.

Now many decades later I still do the same, of course without the apple tree.  I look up and admire the different formations as if God were painting on that blue canvas just for us.  I shot this photo while walking out to get the mail.  Snail mail that is, not email.  :)

Seeing that jet trail made me wonder where that aircraft was headed, perhaps with hundreds of people on board all with different missions.  Maybe a business trip, a vacation, a wedding, a funeral.  Whatever the reason they’re all sitting up there cruising at over 500 mph, talking, eating, drinking, reading, or sleeping and I’m watching that vessel streaking across the sky, leaving behind that white puffy contrail.  It’s amazing that the Wright Brother’s first flight was 120 feet, at an altitude of 20 feet and lasted a mere 12 seconds and today we can fly non stop to Europe at over 9 miles high!

Seeing jet trails floods my senses with past memories of thousands of hours as a pilot flying at different altitudes as high as 41,000 feet.  On some trips, with a little imagination, you could actually see cloud formations of different animals and objects.  Those were the easy flying days but there were those times that certain clouds had to be highly respected like the cumulonimbus which were thunderstorms and sometimes could reach well above 50,000 feet!  I’m retired from flying now, but often relive those flights in my mind.

Sometimes looking at the sky in daylight or the heavens at night you might wonder what life is all about.  Especially on a clear night while viewing the countless number of stars you can’t help but feel insignificant, and maybe my problems aren’t so big after all.

We do a lot of camping under the Arizona stars and often times we’ll use a recliner with a pillow and blanket and stare at that wondrous sight above.  There are over 2,000 man made satellites and millions of “space junk” circling the earth.  You can see them crossing the night sky travelling at over 17,00 miles per hour and circling the earth every 90 minutes.  One night we saw 66 satellites and 14 shooting stars, and on another evening we even saw the space shuttle docking with the space lab!  Sometimes gazing into the heavens will bring back memories of some of the highlights of my life.  Don’t know why, but it does, probably the magnitude of the whole thing.

Later in life we all will relive past experiences as memories.  Our jobs, our friends, our accomplishments, our failures, our adventures, our beliefs.  Some day, in our old age, we may say “I wish I would have ______ .”

After thought:  This is why I love photography.  The simple act of taking a photo of the sky with my phone prompted me to sit down and write this entry.