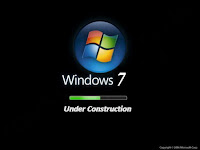 I did not like Vista, along with most of the world, and Windows 7 looks and acts very much like Vista but with some nice new features. I'm keeping an open mind while testing it and will keep you posted on my opinions. It will be discussed at greater length in Cyber News.
Email ThisBlogThis!Share to TwitterShare to FacebookShare to Pinterest
Newer Post Older Post Home